13.01.2016
HANOI/SINGAPORE | By Mai Nguyen and Siva Govindasamy (Source from Reuters) 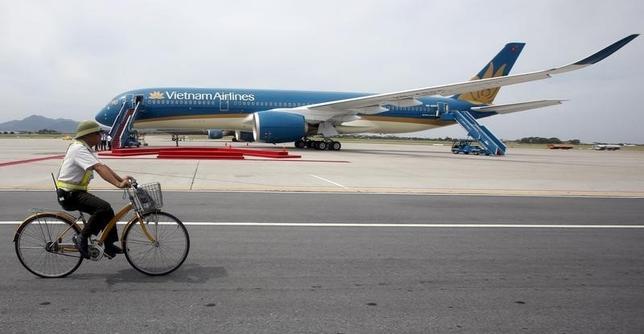 A security guard cycles near an Airbus A350-900 aircraft during its delivery ceremony at Noi Bai International Airport in Hanoi July 2, 2015.
Reuters/Kham

The deal helps satisfy ANA's ambitions to expand in fast-growing regional markets after it backed out of a 2013 deal to buy a 49 percent stake in Myanmar's Asian Wings Airways for $25 million due to concerns over excessive competition in the country.

Vietnam's flagship carrier in turn gains a long-sought partner and funds to help it boost operational and management know-how. Although it completed an IPO in 2014, raising $51 million by selling 3.5 percent of the company, it has yet to list as its return on equity is still far below the 5 percent level required by law.

The sale could be completed as soon as the middle of this year, Vietnam Airlines Chief Executive Officer Pham Ngoc Minh told Reuters in a text message.

The 8.8 percent stake sale for $108 million is a boost for the government's privatization drive which has been criticized as sluggish and lacking appeal, but falls short of the 20 percent holding that the airline had been seeking to sell to strategic partners.

It was not immediately clear if Vietnam Airlines was still interested in other partners.

Vietnam Airlines, which hopes to lift pre-tax profit 64 percent to 2.3 trillion dong ($103 million) this year, competes with domestic low-cost carrier Vietjet, as well as other full-service carriers such as Thai Airways (THAI.BK) and Singapore Airlines (SIAL.SI).

The carrier commands about half of the domestic market while two affiliates have another combined 15 percent share.

It has a 70 percent stake in Vietnamese low-cost carrier Jetstar Pacific, with Australia's Qantas (QAN.AX) holding the rest. Its other domestic affiliate is Vietnam Air Service Company and it also owns 49 percent of Cambodia Angkor Air, a joint venture with the Cambodian government.

The carrier has taken delivery of four Airbus A350s and five Boeing 787s, and plans to take more of both types of jets to expand its international medium and long-haul network and increase services to points in Europe, Asia, and Australia.

The deal, which will see one ANA executive on Vietnam Airline's board, also raises questions about the viability of the Vietnamese carrier's existing codeshare deal with ANA archrival Japan Airlines (9201.T).

» Back
» All tips & interesting facts